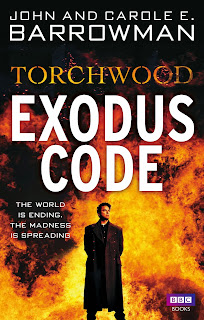 This nineteenth novel written in the Torchwood world created by Russell T Davies for the BBC show of the same name (2006-2011) was written by Torchwood star John Barrowman (Captain Jack) and his sister, Carole E Barrowman.

Torchwood Exodus Code begins with madness. Jack falls from an airplane without a chute in 1930 Peru, survives (Captain Jack is from the 51st century and - unlike other humans from that time or any other - can’t stay dead) and gets prepared for sacrifice to the mountain. The Cuari tribe have been expecting a god to fall from the sky.

All the while, his mind is slipping. Reality is shattering. He’s flooded with tastes and smells and unnatural reactions to sensations.


For a beat Jack realized the chamber was inside his head and outside it. Behind him and in front of him. He laughed at the absurdity and let himself sink back into the rock. The silver veins threaded themselves across every muscle, every limb, every part of him. Closing his eyes again, he could see himself being folded into the rock.

Jack lifted his arm and tore it away from the wall, snapping the threads.

Back in present day Cardiff, Gwen Cooper encounters a madwoman in the aisles at a grocery store who tries to end her suffering by tearing off her own ear. Gwen is also succumbing to a madness that is affecting clusters of women around the world. And it has to do with heightened and crossed senses. Like synaesthia on steroids with some delusion and hallucination thrown in. Torchwood, an organization that investigates alien threats and defends the world against invasion, having suffered grave losses and being org-non-grata with the government, has been, for all practical purposes disbanded. Only Gwen and Captain Jack Harness are left.

When Gwen realizes there’s something wrong on a worldwide scale, she contacts Jack through a computer she’s stashed away down the street while her baby sleeps in her crib. She has the baby monitor. It will be ok, she thinks. She then hears footsteps on the stairs of her house. She’s worried Rhys will get to Anwen and realize she’s not home. Then he'll really be done with her.


Gwen stopped typing. Her hands frozen in mid-air. What if it wasn't Rhys?”

Gwen comes completely unglued and attacks and nearly kills her own husband. Jack comes just in the nick of time. Gwen is put on a ward with other women suffering the same “masochistic madness”. Jack and Rhys try to figure out what’s going on, but without Torchwood computers, it’s slow going.

Meanwhile, something is happening in the Earth’s oceans. Tremors, which are inexplicably not setting off tsunamis, are opening hydrothermal vents in the ocean floor and spewing toxins. Jack enlists the help of an old friend with a arsenal of special tech equipment aboard a ship in the Atlantic.

All the characters in the story come to life. I could picture all of them. Felt I knew them. Exodus Code is the first tie-in novel I’ve ever read. Well, that’s going to have to change. What a ride! It was like getting to experience a two-part episode of Torchwood with more detail and drilling down deeper into the minds of the characters and the forces at work against them.

No real familiarity with the show is necessary to enjoy this book, but being familiar with the characters makes it come alive. It’s a swashbuckling adventure meets sci-fi meets mystery. You are in Captain Jack's muddled head as he tries to unravel the puzzle. If he doesn’t figure it out soon, the world will end. No pressure.

The Barrowmans make a great writing team. The pacing, plot and scenes were very tight. Loved this book cover to cover. More please.
Posted by Ann Wilkes at 9:47 AM