Channel Zilch is a wild and funny ride 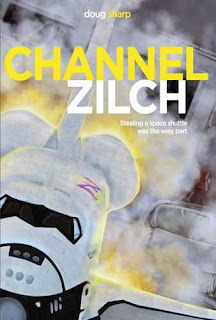 I loved Doug Sharp's sense of humor in Channel Zilch. He maintains levity throughout, even through dire straits (literally), guns in faces and threatened torture. Mick Oolfson, former NASA astronaut, reduced to spreading manure from his plane, The Flying Cow, is approached by a wealthy entrepreneur with a zany plan to go to space, make money and then buy a ticket home.

The plan is to steal the Enterprise shuttle before it heads to its next display gig and get it to Kazakhstan, strap it onto the Energia and launch into space . . . to broadcast a reality show: Channel Zilch. This guy, Manuel Chin, tells him about how he's got a ticket to use the Energia rocket because the Russian guy who's in  possession is a huge 60s rock and roll fan and Chin pays with old Turtles, Herman's Hermit's and Monkees albums and the chopper Peter Fonda rode in Easy Rider.

Crazy, Mick says. But the more he hears, the less crazy it sounds. And then there's the gorgeous, but totally geeky daughter who is completely screwed up emotionally that knows just how to push all of Mick's buttons.


She shoots me a narrow-eyed, nostril-flared gaze that curls my toes, with a tight little smirk like I'd asked her the color of her panties. I see her fingers twitch and the light grid on her belly comes to life--flipping between

Pop Chin emits a guffaw. "Do not let my daughter pull your chain. Heloise has an unfortunate propensity to toy with men's psyches. What do you call this charming avocation, my dear?"

Heloise looks at me mock-sweetly and bats her lashes.

And here's some of Sharp's delicious sarcasm as delivered by Mick.


Right. Mustn't let the other Maritime Byproduct Moguls steal your killer business plan to branch out into media by launching a space shuttle. I ask, "What sort of aggressive security steps are you talking about? Just because I'm an astronaut doesn't mean I'm part ninja. Nunchuks are hilarious in microgravity."

He signs on and the adventure begins. They actually steal the shuttle, right under Mick's old nemesis' nose and manage (mostly) to hide the huge bulk that is the Enterprise from satellites and Navy Seals all the way to Kazakhstan. Just when I thought it couldn't get any more interesting, Chin gets them safely away from their pursuers with the help of the Russian Mafiya. As you can imagine, getting in bed with the Mafiya leads to more unpleasantness.

Mick is yanked around on Heloise's chain, driven to distraction by the nutty star of Channel Zilch and working long hours with little sleep while always pursued and occasionally attacked by the NASA creep who got him canned. Non-stop action with non-stop sweet sarcasm.

Now you want to read it, right? Find it here.