I first met Brenda at OryCon last year where she received the Endeavor Award for her novel, The Silver Ship and the Sea, the first volume in a series. She just launched the third in the series on November 10th entitled Wings of Creation. The second volume is Reading the Wind. Brenda has also published numerous short stories which have appeared in major science fiction magazines and a number of anthologies. In addition to her own series, she co-wrote Building Harlequin's Moon with Larry Niven, whom she also collaborated with on some of her short fiction.

In addition to writing science fiction, Brenda is a technology professional currently working as Chief Information Officer for the City of Kirkland, WA., a futurist and board member on the futurist board for the Lifeboat Foundation, and a public speaker.

But this busy lady still had time to drop by SFOO for a chat. (photo by Joe Merkens) 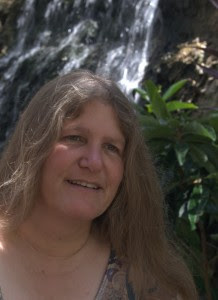 AW: When and how did you first become fascinated with the future?

BC: My father is a rocket scientist – literally. He worked at Douglas Aircraft during the Apollo program, and that got me interested in science and rockets. I’ve always been interested in how the world works, and that led to wanting to understand how we would use science in the future. Then in the mid-90’s, I met the professional futurist Glen Hiemstra, and he has been a bit of a mentor for me on this. He has a site up at www.futurist.com with some interesting articles and a great blog if anyone wants to check it out.

AW: What advice can you give to a new writer about producing three-dimensional, complex characters?

BC: Watch people, listen to them. When I get stuck and wonder what a character might do in a situation, I often write a first-person journal entry from their point of view. I don’t keep lists of character traits, but I do imagine my characters in different situations and sometimes I talk like them when I’m writing.

AW: How did your collaborations with Larry Niven come about?

BC: Steven Barnes, who has also collaborated with Larry, has been a strong influence in my life since the 80’s when I met him in California. I met Larry when he came up to work with Steve on Saturn's Race, and had various opportunities to talk with him at other conventions. Eventually I showed him a story and he knew how to fix it. That became “Ice and Mirrors” which was our first published collaboration. Most of our work was in email and from a distance, and a lot of our early email exchanges were captured in the book Scatterbrain. I was truly lucky to have that opportunity.

AW: How do you find the time to write while still holding down a full time job?

BC: Well, I only write about an hour a day most of the time. Sometimes I get whole days or whole weekends, but most of the time an hour is all there is. But that’s two to four pages, and two to four pages a day adds up. I always have my computer with me, and a journal, and usually some pages I can edit, so if any time does show up, I can use it. Lunches, the hour before work, an hour in a coffee shop on the way home (Yes, it’s a cliché, but it works). I don’t let myself sleep until I’ve written at least 500 words a day, which is 2 pages. Most days I do more.

AW: Can you tell us about your involvement with the Lifeboat Foundation?

BC: The Lifeboat foundation is essentially a large group of people gathered from science, science fiction, politics, futuring, and other disciplines that is hoping to stave off the kind of event that might lead to the current movie “The Road.” So the group looks at everything from asteroids to climate change to disease. My part is much smaller than I’d like it to be – primarily because of my time. So mostly I read lists and sometimes comment, but I would like to do more.

AW: I noticed some of your works now have a Kindle version. Do you own a Kindle and find it helpful?

BC: I love my Kindle. I don’t buy everything on it yet, but I like the portability and the idea that I can hear about a book and be reading it five minutes later. It’s very easy to read on, and disappears in my hand the way a book does.

I belong to a reading group (not writers – just readers) and they try to make sure all of the books they choose are on the Kindle. I think the transition to ebooks is happening pretty fast, faster even than the move to digital music (I can’t remember the last time I bought a CD). I still love the physical form of a traditional book, especially a really pretty one. I just got Leviathan and practically swooned over the cover. So I love my Kindle, but I don’t like the idea that we will eventually lose physical books.

AW: Where do you think we're headed with information and media storage?

BC: It’s all going to be on the net, and we’ll make our own backups on our devices, but the net will be the primary. Google, Microsoft, Amazon, Facebook – hard to tell where. Maybe a blend. But we want information to be always available and that’s the place to achieve that.

AW: Is there a dark side to this glut of information at our fingertips?

BC: Yes. That’s a very insightful question, by the way. There are so many inflows of information in my life, that it’s hard to decide where to put my focus. Personally, I find it really seductive to skim along the intertubes and not really think about a problem. I’m easily distracted between Twitter and Facebook and my iPhone and the internet and and and … and so I sometimes don’t focus enough on the hard problems. This scales from me the individual to the society at large. Right now we have a lot of opportunity, but we have problems like climate change and population and nuclear weapons and the pending clean water shortage that take actual focused thinking. They are enriched by the available information, but I feel like we’re an ADD [attention deficit disorder] society right now, and sometimes I’m not sure we’ll find the focused thinking to solve these foundational issues. That’s really scary.

BC: I’m having great fun with a new book series based loosely on the life of Eva Peron. I have a strong female character in a generation ship in the far future, and I’m using that closed-loop environment to play with the idea that one person can be so influential, and also so grey. Eva did great things for Argentina, and she also made awful choices. So I’ve created a society with that kind of class divide, a working class, and a certain ripeness for change. This is different than my other series, which is squarely all-ages adventure science fiction, since I’m working with more adult neurosis and politics and sexuality. It feels like a really big and slightly scary project.

Also, I’m gearing up to work on marketing a new book that will be coming out in about a year. If you remember, when I saw you at World Fantasy, I said that I might have some news. I do. Sean Wallace from Prime Books purchased Mayan December. This is a Mayan 2012 book, but very different from the movie that’s out now. The Yucatan Peninsula is one of my favorite places, and I’ve actually set a number of stories there (including one available now in Steampunk Tales #2). I created an adventure in the Yucatan across two timelines, and mixed it up with a little science, a little magic, a little legend, and a lot of research. I’m really excited that Sean liked the book, and so I’m trying to decide how to gear up to tell people about it and help them see it’s different than the apocalyptic 2012 books and movies I’ve seen out so far.

Learn more about Brenda and her works at www.brenda-cooper.com.