The Friday post didn't happen for a very good reason. I was at World Fantasy Convention. I didn't have time to blog and I opted to leave the laptop at home. I'm sure all the panels were great and I would love to tell you about them, but my back and the hotel chairs didn't get along. I couldn't sit for more than 30 minutes in them before I had radiating pain down the leg. I only managed to sit through one and a half panels.

Friday night, during the mass book signing, I sat between Shauna Roberts, author of Like Mayflies in a Stream. And Wendy Delmater, managing editor of Abyss & Apex. It was nice to get to know them both. Meanwhile I sent my friends off looking for Dorothy Hearst so I could get Promise of the Wolves signed for my husband, who enjoyed it at least as much as I did. Sue Bolich, my writing buddy from Spokane, WA found her finally. We'd been sitting with our backs to each other that whole time! Too funny.

I got up to stretch my legs for a while and secured many an interviewee. In fact, I came home with commitments from 13 authors and 2 editors!

I enjoyed seeing friends I only see at conventions: Sue Bolich, Felicity Shoulders, Maggie (M.H.) Bonham, Juliette Wade, Andrea Howe and Irene Radford. Sue and I had dinner with two writers whom I shared a spec-fic critique group with years ago: Camille Picott and Stephen Gold. Camille and I will be teaming up for a book signing in Healdsburg, CA next month.

I also made some new friends and met some facebook and Broad Universe friends face to face at last. There were 13 readers for the Broad Universe Rapid Fire Reading.

I met Brian Rathbone, who interviewed me about Awesome Lavratt for PodioRacket.com on BlogTalkRadio. He also interviewed Maggie and one of my new friends, Lizzy Shannon. They both had books launched during the convention: Howling Dead and Time Twist respectively. I'll keep you posted with air dates.

The parties were lively with intelligent conversation, readings and refreshments. Two of them even had single malt scotch. Yum! Locus magazine, Weird Tales and Edge publishing were among those throwing the parties. The most memorable one was in the Corvidian Aeroscaphe Adventures Lounge and featured this fabulous chocolate cake with raspberry filling: 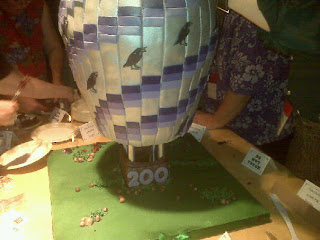 I hung out in the dealers room for a while on Sunday. Apparently, there was a bit of a flood the night before from a crack in the swimming pool above. Really! Con goers sprang into action and moved the books just in time. On the side doors to the banquet room that served as the dealers room, were these signs. Of course, spec-fic writers can come up with all kinds of interesting ways the signs might actually be telling the truth. 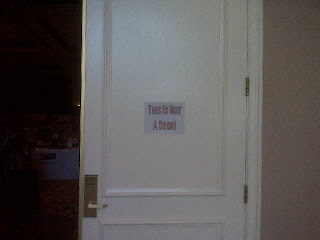 Strolling the dealers room was enough for anyone to realize that zombies have not yet displaced werewolves and vampires. I snagged two new books (Like I needed more!): Howling Dead by M. H. Bonham and Soulless by Gail Carriger. You so need to read the jackets of these. That's all it will take. You won't be able to resist the fun.

Meantime, a new Greg Bear novel, City at the End of Time, came in the mail on Saturday.

Sunday, I left the con early to celebrate my grandson's first birthday. I have my priorities. :)

It was great to meet you on Friday night. I got a copy of your Awesome Lavratt and am looking forward to reading it. Sounds fun.

Thanks for mentioning Like Mayflies in a Stream in your blog. I appreciate the publicity.