I met Gerald and Candy at local SF conventions. I've enjoyed their writing in the pages of Analog Science Fiction and Fact. As I'm about to embark on a collaborative effort of my own, I was anxious to hear what they had to say on the subject. I sent them interview questions separately, but asked them some of the same questions. They even collaborated on this interview at the pub over beers. Gerald is pictured here on a trip to Antarctica. You can read more about his travels on his website. 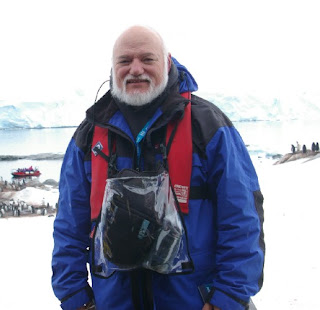 AW: How much time per week would you say you devote to writing and research?

GDN: Over the course of a year, I probably devote half my time to writing and writing related activity. Of that half, maybe a tenth is given to writing new material. The rest is rewriting, reviewing other people's writing, marketing, follow up. My research time is split between research for specific stories, and general research supporting my future history as well as simple curiosity about the world around me.

In one sense, I'm working just about all the time. In a strict sense, however, I maybe spend 5% of my time drafting new material for publication. I intend to increase this because I have a lot to say and, at 62, not too many years left to say it. I also have time-intensive volunteer activities, which I'm afraid I need to scale back a bit.

AW:What's the most rewarding thing about collaboration?

GDN: Getting the job done! Left to my own devices, I let stories lie around for years before actually sending them out. Having a commitment to another living, breathing person makes me do the work
and get the work out the door.

AW: How much do you rely on writer's groups for feedback?

GDN: Almost entirely. Just about everything I've done since 1991 has gone through my writer's group. I have them pretty well calibrated; I know who I can rely on for what.

AW: What was the strangest convention experience you can safely share with my readers?

GDN: At the last Worldcon in Montreal, the Science Fiction and Fantasy Writer's of America's suite was closed down right in the middle of the Asimov's readers award ceremonies. I was in the quiet room in the SFWA suite when a phalanx of Delta Centre-Ville Hotel security personnel burst in and, very impolitely, told our hostess we were making too much noise, to get all but three people out of the suite,
and that we were not allowed to have "parties" on this floor, and so on. They were extremely rude and intransigent, with raised voices, accusations and everything short of baton blows.

The people assembled complied, sort of. After assurances were given, a large number of non-essential people left, including myself. The doors were closed, and the Asimov's rewards were quietly completed.

The next day, SFWA volunteers (including myself) moved the suite to a "party" floor suite, provided courtesy of the convention organization which had made the original arrangements. Needless to say there was a great deal of irritation, bad feelings, and simple wonder that such a thing could occur.

An explanation of sorts emerged; apparently there had been a news article saying that one of the publisher parties on an upper floor was open to everyone, and there was a fear that all the riffraff of Montreal would descend on the hotel. Therefore, the hotel management decided to restrict all party-like activity to two floors and control admittance very strictly. None of this was the fault of the SFWA which had arranged the suite through the convention staff, who had made the arrangements for the non-party floor suites with the full knowledge and understanding of the hotel's marketing staff.

Anyway, this was a very disagreeable, strange, and surreal experience to go through, and unlike anything I've every encountered at a convention before.

AW: Tell me about the Black Hole Project.

GDN: That could take a great deal of space, so I'm just going to give the essential details on the novel and then talk about writing it. If people have more questions, they can start with the "Black Hole
Project" page on my website; www.gdnordley.com.

The Black Hole Project is the name of a five part novel that Candy "C. Sanford" Lowe and I wrote about a mammoth interstellar project to make a black hole by accelerating billion ton rods up to relativistic velocities and arranging for them to converge in an implosion that results in a black hole big enough not to vanish through Hawking radiation. The rods are accelerated from five star systems which
happen to form an approximate tetrahedron. Now, that's all I'll say about the plot and background.

Candy and I wrote the novel as five separate novellas, each taking system that sends a billion-ton rod "impactor" to the implosion and at the implosion site itself. This took us eight years from concept and initial notes until publication as a series of five novellas in Analog Science Fiction and Science Fact. During that time, Candy's husband had a serious automobile accident which rendered him paraplegic and Candy a caregiver and sole breadwinner for their family. She fought her way through all that and got the job done!

While she drafted some of the scenes, most of the initial drafting fell to me. After the initial draft, we went back and forth with the material until neither of us can tell who wrote what in its final form. Some reviewers claim to be able to tell, which we find very amusing. What do they know that we don't?

The scientific basis for the story is as good as we could make it, but keep in mind that it takes place a couple centuries plus from now. We didn't throw out any laws of physics that we know today. We do anticipate some new physics discoveries--such will occur--but they aren't game changers and the plot doesn't depend on them. We've made a brave attempt at projecting future engineering developments that can be done with the physics we have. This includes biological developments such as genetic engineering for immortality and ease of communications with the cyber world. These are part of the "furniture" of the story, they aren't what the story is about.

The main theme is the struggle between fear and curiosity, between reactionary politics and vision, between striving to discover and striving to control and suppress. Our people are villains, heroes, and in-between. There is sacrifice, there is cowardice, there is tunnel vision, and even a little humor here and there. We set out to write an epic story about a big dream, and hope we got there.

AW: What are you working on next?

GDN: With Candy Lowe, I'm working on a young adult series that takes place on an artificial space colony in the L4 resonance area of the Moon's orbit.

With my wife's copy-editing help, I'm rewriting a novel based on my novellas, Crossing Chao Meng Fu and Into The Miranda rift.

I'm drafting, when I have time, a novel about a terrorist bombing on a space liner bound for Saturn.

I have a long delayed fourth science fiction detective novella in the Trimus series in work, featuring the whale like detective Drinnil'ib and his human companion, Mary.

I have numerous pieces of short fiction in various stages of completion, which I pull out and work on when I'm sick of working on other stuff. I'm as busy as I want to be, which is a good thing. My resolution is to be more efficient and productive next year! 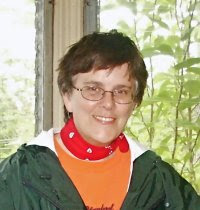 AW: Do you start with a 'what if', a character or a place?

CSL: Generally, I start with a character, usually inspired by someone I have known. I put them into a situation and let the character evolve.

AW: What or who sparked your interest in science fiction?

CSL: It started with Heinlein's Stranger in a Strange Land. I was in flight school at the time, studying to become a commercial pilot. Our instructor brought in the book and it went through our class like wild fire. Gerald's stories have been a tremendous influence as I've been so inspired by the science and "his world".

AW: Who's your favorite character that you've written and why?

CSL: Every current story is my favorite story and every current main character is my favorite. The one that comes to mind (besides the current main character) is the Scottish professor, Bruce Macready, in the Black Hole Project story "Loki's Realm". He was so charming and self effacing. He was fun to set up against the loud and raucous Dagger especially in the scene where they are abandoned on a half-finished modified Bernal's Sphere talking about sex to stave off the horror of their impossible situation as their little space runabout tumbles away
from them.

AW: Speaking of your collaboration with Gerald (G. David Nordley), if one of you was the right brain and the other the left, which are you?

CSL: I forget which is which. We both have strong creative juices. Gerald's theory of writing is to make an outline and then start the story at the beginning and go until you get to the end. I was born on the cusp of Virgo and Libra, so on even days I write in a logical manner and on odd days I write with abandon - here and there and everywhere in the story. That's the draft version. The rest of the drafts (and there are many) must, of necessity, get seriously left-brained.

AW: Do you argue over plot points, dialog,story arc, etc.? Who wins more of the battles? Why?

CSL: Of course we do! The winner is usually Gerald's wife, Gayle, who settles them. She's our disinterested 3rd party and one hell of a clear-eye reader.

AW: What is the most rewarding thing about collaboration?

CSL: Without a doubt, getting the work finished and sold.

AW: Where can we find more information about your works?

CSL: I'm in a couple of places on the web. As C. Sanford Lowe, I can be found on Gerald's web site that has lots of info on the Black Hole Project. By myself, I write under Candace S. Lowe. I wrote "Dead Metal" and won first place many, many years ago with the New England Science Fiction Writer's Association. I also collaborate with my composer/husband, Ron Alford. We have performed his experimental electro-acoustic music in Europe, Stanford University and most currently at UC Santa Cruz.