IFC Midnight features genre films. They sent me some trailers for films that are upcoming or available on-demand now. The trailer for The Human Centipede II was just the creator walking in a parking garage with his voice narrating rather than him actually talking. Not much to see or hear, but from the interview that follows, it sounds pretty gross: a mad doctor sews people together head to but - twelve of them. I can most definitely live without it.

The other movies are all edge of your seat horror. I wish they'd actually include science fiction like they say they do, but these start with a standard plot - young men and women trapped in the wilderness with "it" or young outcast gets powers and must save the world, but can't save his soul - but they go way beyond the formulas and the acting, from what I can tell on the trailers, is not bad at all. These are all available On Demand right now as part of IFC's fantasticfest.

HEARTLESS is the tale of a man with a birthmark across his face. For a chance to have a normal face, and what he thinks will be a normal life to follow, he makes a deal that he soon regrets. Neighborhood thugs are not human and only he can see them for what they truly are. He is called upon to kill. His happy-ever-after turns into a nightmare. Sneak Preview is available now on-demand. It hits theaters in November.

PRIMAL begins with a group of young people exploring ancient places in a remote area of Australia. Something finds them before they find it, transforming them one by one into vicious killers with lots of pointy teeth.

In HIGH LANE, a group of young hikers unknowingly encroaches on a killer's territory. 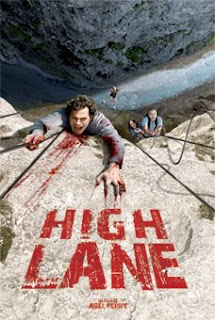 RED, WHITE & BLUE features Buffy the Vampire Slayer star Amanda Fuller who plays an emotionally wounded nymphomaniac who meets a mysterious Iraq Vet who doesn't want to immediately jump in bed with her. When one of her past lovers comes back things go as far south as they can get. This is by far the goriest.

Wow, we are such big fans of Sci-Fi and classic monster movies. So much so, we started up our own Indie film business a few years back called Big Tex Movin' pictures. As you can guess, we're down here in Texas. Our first movie's just hitting Amazon at: http://www.amazon.com/Color-Blood-William-B-Hughes/dp/B0057J2JBM/ref=sr_1_1?ie=UTF8&qid=1309628804&sr=8-1 It's called The Color of Blood and it's full of pretty girls, creepy settings and one crazy new monster. The story surrounds a bunch of young artists, trying to make their names, and the trouble they get into when they start working for Zorasian Gallery. This Zorasian guy is actually an Aztec Vampire and you know what trouble that leads to!

Our next film is Matt Mercury and His Rocket Rangers. It'll be our feature length version of an award-winning short film http://vimeo.com/21527211

Matt Mercury will be great fun to make and even more fun to watch, at least for fans of the good old days of final frontiers, mad super-genius' and alien a'plenty!

You can see all our upcoming and upgraded specila effects (and there really cool) and much more on www.bigtexfilm.com and follow Indie Film action on www.indiefilmtexas.com

Hope to see y'all around and let's fans keep makin' movie magic!