Firedancer - and SA Bolich on weaving a rich tale 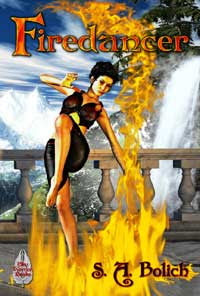 In Firedancer, S.A. Bolich introduces us to a fascinating world in which Clans have power over the elements of fire, wind, earth, and water. This is more than elemental magic though, and the way in which Bolich weaves her world together creates an organic tapestry of cultures that is completely convincing. At the heart of this first volume is Jetta Ak'Kal, a Firedancer of the third rank.

The story opens when a fire erupts in Jetta's home village of Firehome Vale, and we instantly see that this fire is not a simple thing. The opening line gives the perfect description:

This fire was malicious.

A delicate balance exists between the Ancient - the deepest fire that smolders beneath the earth - and the Clans that remain vigilant against it. Trapped underground, the Ancient perpetually searches for a way to reach the abundant fuel on the surface. Jetta has fought against this fire all her life, like all Firedancers, using a learned Dance, the moves and forms passed down from master to student. In her previous assignment in the village of Setham, Jetta's Dance failed, and she lost her lifemate, her reputation, and her confidence.

Healed in body, but not in spirit, Jetta is given a new assignment in Annam Vale, a mountain village where the Delvers mine the containment stone used throughout the land to build fireproof structures. Yet rumors tell that Windriders also inhabit the distant village, and when fire is fed by the wind, catastrophe could result.

On arrival in Annam Vale, Jetta meets both encouragement and resistance from the Delvers. Yet it is the abrasive and secretive Windriders that provide her with unique challenges as she works to unravel the mysteries of the Vale. For Old Man Fire has started to resist the Dance. The forms and patterns that Jetta has always known no longer work as they should, and she must use all her resources to discover a solution before fire escapes from the mines beneath the town.

This book was nearly impossible to put down, with compelling characters and such an original concept that I was driven to discover more about this world. Bolich has infused so many details into the cultures - whether it's a Firedancer's braided hair and dance leathers, or the carvings made by a Delver - that I found myself completely enraptured.

The threat of the Ancient lurked beneath all of the other plot threads, creating an ever-present tension. As the story progressed, multiple subplots emerged that added complications of politics, love and jealousy, mistrust, and tragedy. And it all flowed naturally from very real characters. Firedancer is the first book in a planned trilogy that is off to a great start. 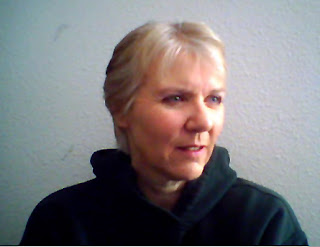 AW: When did you first start writing fantasy?

SAB: When I was 14 my best friend lent me her copy of The Lord of the Rings, doling out each book one at a time. I flew through them in three successive days. And then I immediately sat down and began to write my own Tolkien-inspired epic. The first two are still in my drawer. I never finished the third, but it taught me a lot and I still use elements of it in some of my stories.

AW: Who were your major influences, both authors and those who encouraged you in your craft?

SAB: I read in a lot of genres. My favorite authors when I was a teen were Andre Norton’s YA SF and fantasy stories and Rosemary Sutcliff, who wrote awesome historical fiction. I very much enjoyed Anne McCaffrey’s dragons and Heinlein’s SF and pretty much everything else I could get my hands on. I won my first writing contest in the 6th grade; my 9th grade English teacher wanted me to try and publish some of my stories. In high school my teachers encouraged my writing in every way they could, and I’m grateful to them, because they somehow stuck it in my brain that I should nurture the writing spark that has never quite gone out no matter how much life has gotten in the way.

AW: Where did you get the idea of the dancers who control elements?

SAB: Heh. Good question. I distinctly remember the first line of Firedancer landing in my brain. Like all of my stories, the thing built itself. When my fingers start on the keys, I truly am never sure what is going to fall out. Things appear that have zero meaning until a few sentences farther on, and then I think “aha!” But after Jetta first began to dance on page two, the whole story took off and all at once the correlation between fire and the Dancers who fight it fell into place.

AW: Your prose is so rich, your characters so well-drawn. Where did you learn to write so descriptively? Do all the descriptions come in the first draft or do you go back and flesh out the scenes and characters later?

SAB: Description has always come easily to me. I’m fortunate, I guess, in having lived in many interesting places and grown up on a farm, forever outside running around in the dirt and the wind and the rain atop a horse. It has embedded a great deal of sensory memory into my bones, I think. I remember when I was still in junior high I started writing a historical novel about a girl from the hills of Tennessee who came west. I handed my mother two versions of the first page and asked her which she liked better. She handed me back one and said “This one. I feel like I’m there.” Sometimes I let the scenery get too rich, which interrupts the pacing, and have to cut it back. In fact, my editor made me put in a lot of sensory detail I had left out of Firedancer because I was afraid of stretching the word count and slowing the story too much. Now I’m hearing all kinds of good things about the richness of the writing in Firedancer and how it really puts people into the story. So…I guess I will follow my instincts and continue to wrap words around what I visualize in my head. Not everyone will like it, but my personal taste leans toward really rounded descriptions of the worlds I visit. I just like the big fat doorstop books, I guess.

I often do flesh out the bare bones of a scene in the revision, but more often I find myself cutting rather than adding.

AW: I know you're a co-founder of Other World's Writers' Workshop. Would you like to tell my readers more about that?

SAB: I am always happy to pitch www.otherworlds.net. It’s one of the oldest genre workshops on the Web, founded in 1998 and hosted at Yahoo Groups (OWWW) since 1999. It is an all-levels workshop, from beginners to pros. The critiques are detailed and intense, because we warn people up front we are geared toward publication. We’re not a reading group and we thin out the lurkers every month to keep people focused on actually writing and submitting and improving their work. We have some wonderful writers who have progressed from pretty raw beginners to published authors.

AW: When can readers get a hold of the next volume?

AW: Do you have shorter works readers can find online or in e-book format?

SAB: I have many stories out at Beneath Ceaseless Skies, On Spec, Damnation Books, Science Fiction Trails, and several other magazines and ezines. I also have stories in the Wolfsongs 2 and Defending the Future IV: No Man’s Land anthologies. My short ebook Who Mourns for the Hangman? is available along with Firedancer pretty much everywhere ebooks are sold.

SAB: I am in the final revision stage with Windrider and then I will start on the next book, tentatively titled Seaborn, that will come out in 2013.