Psyche's Prophecy might make you look over your shoulder 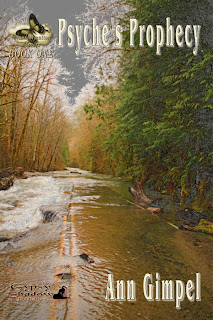 
In Psyche's Prophecy, author Ann Gimpel takes us to a near and possible future in which resources are scarce and rolling blackouts and gasoline shortages are increasing. Amid this burgeoning dystopia, psychotherapist Lara McGinnis stays busy, counseling disturbed teenagers, OCD patients, and couples with marital problems.

The story immediately takes on the trappings of a thriller before delving into the fantasy aspects that are at the heart of this mixed genre tale. Dr. McGinnis learns that patient Ken Beauchamp is abusing his pregnant wife and steps in to offer the woman assistance. Her help comes nearly too late. Mr. Beauchamp puts his wife in the hospital in critical condition, disappears from the authorities, and begins a course of stalking and retaliation upon Dr. McGinnis for her interference.

In her private practice as a psychotherapist, Lara has found that her long-time ability to read auras has always been handy. However, she has more frequent and disturbing visions as the conflict with Mr. Beauchamp and the unpredictable blackouts across the city continue. On top of this, a graduate student, one of her other patients, and even her live-in boyfriend, Trevor, have all had a common dream. Lara tries to solve this mystery while everything else around her spirals deeper into chaos and her visions become darker.

The first half of this book kept me up at night, both as a page-turner and in sympathetic fear for Dr. McGinnis. This is a very good thing if you're a fan of that type of story, but if the thought of having a stalker break into your residence will give you nightmares, then you may want to read this only during daylight hours.

As the story progresses, Lara must face who she is and what her paranormal abilities mean. There are dark forces at work other than Ken Beauchamp, and ancient mythologies turn out to have real relevance to modern life. Lara and Trevor's characterization sparkled as they confronted new facets to Lara's power and the inevitable changes to their world.

In the second half of the book, I felt like the tension lagged. Although to be fair, it was more like the type of tension changed, because this is where the fantasy aspects became heavier. A lot of information about magic, witches, and power is introduced that seems more like buildup for the next volume.

Psyche's Prophecy was recently announced as a Finalist for an EPIC e-book award. While there is a definite conclusion to this book, there are also many questions left unanswered. Psyche's Prophecy is the first book in a planned trilogy and the second volume, Psyche's Search, will be released soon.
Posted by Ann Wilkes at 7:39 PM

Loved this book, it really is a page turner!

Beautifully and wonderfully executed review of this book. I like your post and I wanna read this book. Thanks.

Nice review. Sounds like this will be an intriguing trilogy.

What an awesome review of this novel. I can't wait to start reading it!

Thank you, I'm glad to be of help!

Can't wait to read them all. Great job, Ann.

Thanks, everyone. And especially Clare for such a thought-provoking review.
Ann