OryCon Blew Me Away

Can we do it again next weekend? I had a ball at OryCon in Portland, OR last weekend. I sat on 9 panels, did my pro bit at the writer's workshop and read at the Broad Universe Rapid Fire Reading (twice).

The Writer's Workshop was my first gig at 5PM on Friday. It went well, but could have used more time. We had 3 pros and 3 victims-er beginning writers. Each writer heard a critique from their peers and the pros and then had 5 mins for questions all in an hour. If you do the math, you will see that it simply does not add up. We did the best we could and handed over very detailed crits to the authors.

Who would have guessed that "To Outline or Not to Outline, that is the question" would be an animated, fun panel? We had fearless moderator, MK Hobson, who is the anal outliner, Alma Alexander whom you couldn't pay to produce an outline and Peter A. Smalley, who mostly does outline, but not in as much detail (70 pages, really? ) as Mary. I just hope we weren't having so much fun that we forgot about the audience. ;) And where do I stand? An outline? Only if I'm desperately trying to find my way out of blind alley and then only a couple sentences per chapter, no tiered structure.

"Women Role Models in Science Fiction" sort of morphed into a study of the shifts in gender roles and how both sexes are still figuring things out in the real world. The fact that a strong female role model is not a warrior with tits was only the beginning.

I moderated "That's gotta hurt!" with GOH EE Knight on my left and Rory Miller, with a gory photo album of real injuries, on my right. We went the full gamut from torturing characters with set backs, to nearly killing them, to killing everyone around them. And Rory kept it real, with real-life examples, the physical and emotional cost and what doesn't work.

Aimee Amodo and I delivered "How to give a stellar reading". Aimee talked about all the things that make writers - or anyone - afraid to speak or read before a crowd. We went on to list numerous tips to make your reading the performance it should be. Then came the fun part. I asked for volunteers (very forcefully - ;) ) to deliver readings to work on their voice inflection, volume, modulation, eye contact and body language. So they wouldn't be distracted by unfamiliar words, I had them use nursery rhymes. Imagine hearing Humpty Dumpty and Three Blind Mice as a eulogy, Mary Had a Little Lamb as a candidate speech and others as a newscast or an acceptance speech. And Aimee charmed us with one as William Shatner. Fun stuff.

I actually learned stuff on the "How to Prepare a Manuscript" panel from my fellow panelists, moderator John C Bunnell, Patrick Swenson and Camille Alexa.

Mary Robinette Kowal deftly moderated the "Alien Etiquette" panel. The discussion continued to lead back to how hard it is to come up with aliens who are more alien than some isolated tribes on our own planet. We mostly take a custom that is odd to us and push it to the extreme or invert one. And the devil's in the details. We have to come up with the cultural norms, manners and behaviors for our aliens that fit their unique setting and circumstances.

I had a ball moderating "Blah, blah blah, she said". We had five or six pros (including GOH EE Knight and William F. Nolan) who never tired of sharing dialog don'ts and giving examples of best practices.

My last panel on Saturday was a Feedback Workshop, the expected structure of which no one understood. As moderator, I sort of winged it based on who showed up and what they expected to get from it. It turned out fine and I think everyone had something to take away.

Sunday I was glad to be the traffic cop for "A Touch of Farmer, a Pinch of LeGuin" since I was the least-well-read person on the panel. Just going down the table sharing our influences took half of our time. Writers are passionate about good writing.

While reading at the Broad Universe reading, a crying baby made its entrance. I had no trouble speaking over the dear, but BU host extraordinaire, MeiLin Miranda felt bad, and since we fired a little more rapidly than expected, I was able to read a second piece that I had brought in case I couldn't shave the first one down to the required five minutes. I read an excerpt from a story I'll be sending out later this week after a few more final touches and my fractured fairy tale that always gets a roomful of laughs, "Troll Games".

Friday night after my panel marathon, I hosted a dinner with Broad Universe pals and other con friends. I should have got off my tush and taken more pics. I know Joyce took a bunch, but I don't have them yet. Here's what I do have. 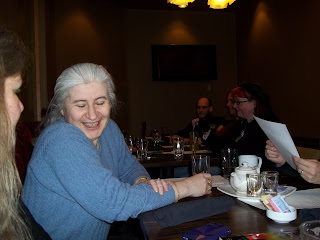 Even though her eyes are closed, this is great of Alma Alexander. That's Brenda Cooper to her left. On my other side were Andrea Howe and her hubby, Jeff. At the other table, besides David and MeiLin, were Mark Ferrari, Shannon Page, Camille Alexa and a couple of Mark's friends. 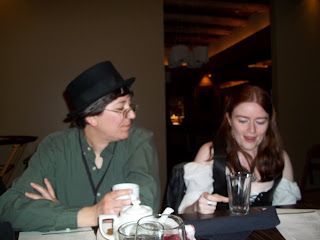 And across from me were Renee Stern and an unfortunately blurry Rhiannon Held.

At a room party Friday night I became fast friends with Vivian Perry, who lives in Oakland and sings Jazz. Definitely won't wait till the next con to get together with her. She gave me a CD and the girl can sing. ;) And don't you think she looks like Moriarty's girlfriend, the Duchess Bartholomew from STNG? 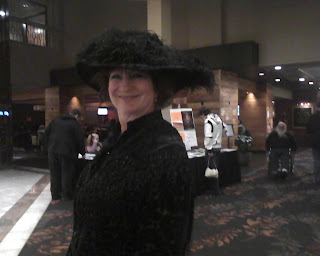 I also had fabulous conversations with Richard A. Lovett, G. David Nordley, Bob Brown, Amy Thompson, SA Bolich, Brenda Cooper, Alma Alexander, Joyce Reynolds-Ward and many others. After the con, I met my Aunt and cousin Richard and family for lunch. Then my cousin, JoAnn took me to the airport. When she picked me up at the hotel I still had to fetch the books that didn't sell in the dealer's room. I'm pretty sure next year I'll be staying with her and she'll be coming to the con. The dealers room alone bowled her over - yes I snuck her in. But, hey, I converted her for next year. ;)
Posted by Ann Wilkes at 5:46 PM

Wow! What a great conference! It's all about the energy and the people who contribute to one another's craft it seems. Congrats on participating in so many panels and presenting what you know best.

Speaking as one of the victims,er...authors at the writers workshop, I was delighted to stumble upon your awesome blog and get another viewpoint of Orycon. Although we were rushed for time, I still appreciated the hard work that you and the other pros put into the workshop.

I also attended several of the same panels and enjoyed them. Orycon is always fun and informative. I also blogged about it in www.scifibookreview.com.

See you next year and success in your writing. Sheron