Honeyed Words - yeah, they are 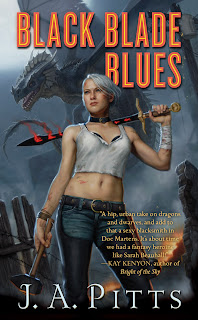 Black Blade Blues looked like it would be a fun read. It’s a modern-day adventure with dwarves and dragons, starring a female blacksmith who is dating a bard. Throw in SCA fighters, a Norse god or two, and an ancient, broken sword with runes running down its length, and I figured, how could it go wrong?

And indeed, though there were some places that felt rough, especially in the earlier part of the book, Black Blade Blues proved to be a good solid adventure story. Stuff did go wrong, of course, but in the story, not in the writing. Our hero was faced with an escalating series of challenges that ended in a confrontation between the evil dragon who had kidnapped the love of her life and his minions, which included ogres and trolls, and our hero and her allies. The good gals and guys didn’t win all they wanted to, but they survived (they had to do that—there’s a sequel!)

The world is grittier and more real than I expected from the delightfully disparate ingredients I mention in the first paragraph. The climactic battle is exciting and the end poignant. Black Blade Blues read like a first novel to me, but a solid one, and I’m glad it found its way onto my reading list. 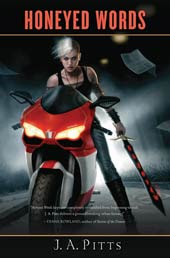 Honeyed Words picks up not too long after Black Blade Blues, though we happily get to skip the hospital and physical therapy bits. Our blacksmith-hero, to her frustration, has found that knitting is helping her burned hand regain function. She sets all of her worries aside to take her girlfriend away for a birthday trip, to go see a friend and ren-faire musician, who made it big, perform.

After the performance (hey—was that a real elf in line?) the musician is kidnapped, elves show up to do mischief, and then our hero ends up working with a very strange blacksmith who has an odd—well, I don’t want to say too much, but more than one strange and magical family legacy is involved, and so are the dragons and both their minions and their opponents. As if that wasn’t enough, someone’s making a magical “blood mead”. These various strange and fascinating things were easy to follow as I read, but seem more complicated now that I’m writing this review and looking at the book structurally, instead of experiencing the adventure.

Honeyed Words more than lives up to the promise of Mr. Pitts’ first book. It’s fun and riveting. The relationships between the various magical peoples, and especially between dragons, gods, and humans, are more complicated than they first appeared (and they are perhaps, less black-and-white). I had trouble putting this book down when it was time for chores or bed. I wanted to see how all the disparate threads in the story came together in the end. I finished the book satisfied and wanting more.

I’m always happy when the second book in a series is better than the first. It just seems wrong when it’s the other way around, but that’s not the only reason. I’ve found that an author whose work gets better cares about the craft of storytelling, and is therefore someone I’m willing to trust my all-too-scant recreation time to again and again. One thing is certain—when the next book, Forged in Fire, comes out next spring, I won’t start reading it on an evening when I have to get up and go to work the next day.
Posted by Ann Wilkes at 11:48 PM