Peter Hamilton, The Man Behind the Void

I'm an admirer of good world-building. That's the exception I make when I pick up the odd fantasy novel. Peter F. Hamilton is truly a master world-builder. He's been writing since 1987 and has steadily built momentum. For a full bibliography and bio, visit Peter's website where you'll also find links to four fan sites. 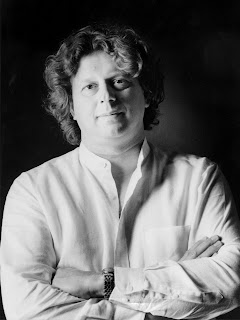 AW: What was the first SF book you read?

AW: When did you first know you were going to make it as a SF writer?

PH: My confidence to try a novel built up when the short stories I submitted to magazines in the late 80’s started getting accepted on a more regular basis, so I began to write Mindstar Rising which was eventually published professionally. When I got the first set of reviews for Reality Dysfunction I thought I could probably make it commercially.

AW: What writer most influenced you starting out?

PH: No one author in particular. The list would include, but not be limited to…
Asimov, Clarke, Julian May, Haldeman, Heinlein, Niven, Bova, Silverberg.

AW: Do you have people you bounce ideas off of?

PH: Not at the start, my initial creative process is a solitary one. The nearest I get to feedback at the beginning of the novel is drawing up a brief proposal for my publisher. After that (if they say yes) I’ll write the whole novel and send it to my agent. Once he’s made his comments it goes to the editors for their notes and my wife will sometimes make suggestions at this stage.

AW: How do you keep track of all the characters and details in a universe with so many complex story lines such as in your Void trilogy?

PH: An awful lot of notes. I plan everything out at the start, from characters to the nature of the civilization the story is set in, to the techno-economy of the worlds, to starship technology. I also have fairly detailed chapter notes. This is essential to me, especially given the size of the series I write. The Void Trilogy took 6 – 9 months just to plan out before I even started chapter one.


AW: Which of your books was the most fun to research?

PH: Looking back I suppose it was Mindstar. This was way before the Internet and I spent hours at the local library finding out about the airship industry of the 1930’s. It was a topic which completely drew me in, and I read far more than was strictly necessary for the book. I wish I had that luxury of time nowadays.

AW: What advice do you give to aspiring writers?

PH: Always; just keep writing. It’s the only way to understand the whole process of writing. That and remember there is no set way to go about writing a story or novel. Whatever method works for you, if it’s middle of the night, or a thousand words before breakfast… whatever.

AW: What defense do you offer when you get the dreaded, "You write SF? I used to read that when I was a kid"?


PH: After I’ve finished cringing? I try and explain that the genre has probably moved on, and you should give the modern stuff a try. After all there are some great writers out there now.

AW: I have enjoyed your Void series. In fact, I'm having withdrawals. When will the next book be available?

PH: I finish (in theory) writing the Evolutionary Void around Christmas (2009). So the publishers will shove it into their schedules for I believe mid/late 2010.

AW: If you could live anywhere on this world in any kind of home, where would it be and why?

PH: Having spent a fortune and years extending my own house I’m tempted to say I’ll just stay where I am. But if I did ever win the lottery I’d go for a new solar powered eco-friendly but still ultramodern house overlooking either Rutland Water or a beach in Cornwall. As to why, I’d like to see a shift towards more off-grid housing, reducing the strain on the ecology. The technology is there or is being developed.

For my review of The Temporal Void, visit Mostly Fiction.

Just want to add that I read some great sci fi as a kid, starting from Asimov's lucky star (i think?) and moving on ...
Old Sci Fi has some great books and authors (E. E. Doc Smith for an example).