Last night I watched all 8 episodes of a new science fiction webseries made with Moviestorm. Damien Valentine is writer (with Kim Genly), director and editor. Said Damien, "Every frame of every scene was created using just one computer thanks to Moviestorm..." Episode one was released Tuesday (April 26th). It even had a big screen showing in the UK.

The story opens in the 24th century with an "accident" on a Titan mining colony. The only survivor happens to be a reporter, which seemed contrived until I saw the episode explaining how she happened to be that far from the blast. She suspects the government is behind the explosion that devastated the colony and mining facility. She ends up on a freighter with a couple, Adam (Charlie Allen-Wall) and Ravyn (Gabrielle Pugliese) that want to help her after her traumatic experience. 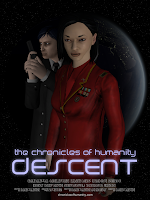 I don't know what the limitations are with Moviestorm, but for a DIY (do-it-yourself) animated movie, it's not bad. The storyline and script held my attention. Some of the voice actors gave performances that would be nearly flawless if I closed my eyes. The mouth animation and stilted movements were a little distracting. Worst of these was an embrace that came out of nowhere and seemed to miss. I mean their arms didn't connect right. And it didn't fit right with the dialog.

Richard Grove (Captain Heyman) delivered his dialog with authority, character and a natural flow, as did Ingrid Moon (Commander Fulmer). Authority and being comfortable in that captain's chair is important. Need I mention Scott Bakula as Captain Archer of the Enterprise? I actually joined a Star Trek message board just so I could post "Archer must die!" Captain Heyman, on the other hand, I could listen to all day and hang on his every order.

And Commander Fulmer had just the right amount of spunk. Her personality added spice to the bridge.

Katherine McDonald needed more action scenes. I wanted to see her actively investigating and snooping, not just hearing about it afterward.

I encourage you to check it out. If nothing else, it will inspire you to do great things with one computer yourself.

****
GeekChicDaily LA launched today. It's an e-newsletter to keep geeks in LA informed of the latest local science fiction haps, including "film festivals, gallery openings, comic/anime/manga conventions, gaming tournaments and signings, as well as profiles of local artists and personalities."

A little bird told me there are more steampunk Pinkerton episodes on the way. Stay tuned for more about The Pinkerton Files. Meanwhile, you can read my review of the first episodes here (You'll find a Falling Skies trailer there, too.).

Also, I'm dying for some more Minister of Chance. I'm thinking that if more people buy the first episode, they'll release the episode two sooner. Money talks, right? Check out Minister of Chance for your own entertainment and so I can get my MOC fix! Read my review.

TNT sent me a press kit that included the first two episodes of its new science fiction series,Falling Skies, and a cool cotton, drab olive shoulder bag. I'm thinkin' it could easily double as Browncoat (Firefly) gear. You'll see a review of the series complete with an interview with Connor Jessup very soon. Falling Skies premieres on June 19th and stars Noah Wyle. It's a DreamWorks Television production with executive producer, Steven Spielberg.

TRAILER TIME!
Rise of the Planet of the Apes and Immortals. Happy Friday and enjoy the trailers!
Posted by Ann Wilkes at 9:19 AM