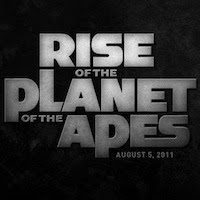 I think going to see Beneath the Planet of the Apes was my very first date. I don't remember my date's name. I was 8 years old. But I went alone with a boy, so I guess it qualifies as a date. We also played penny ante poker at Gma's house. I had just got blue suede clogs and was delighted to have somewhere to go to show them off.

Now, thirty years later, Planet of the Apes is alive again. And you can watch footage from the film with behind-the-scenes goodies and a Q&A on its facebook event page. The movie will hit the big screen in August. The biggest challenge for me will be to accept an actor other than Roddy McDowall as Caesar. This Twentieth Century Fox production has cast Andy Serkis in that role. Alas, Roddy's not as young as he used to be. I was glad to see that Brian Cox and John Lithgow are in the line-up.

The teaser will be shown at 2:30 pm Pacific on Wednesday, April 13th on the facebook event page: http://www.facebook.com/event.php?eid=208627862498676
It's living on the Avatar fan page. Hmmm. Now that's just wro...strategic positioning. Actually, this live-stream is produced by WETA, the visual effects masters of Avatar, so I guess they're entitled.

Just got the embed code! Now you can watch it here! w00t!

You can also post a question to the Apes Will Rise fan page and it might make the cut. See you there!

And stay tuned tomorrow for an interview with E.E. Knight.
Posted by Ann Wilkes at 6:55 PM

Let's hope the movie will be as good as the original ones.