Everyone has a different writing process. My first draft tends to read more like a "tell". It serves as an outline sometimes. It's me getting the plot and players down on the page — unless it's the world that sparked the story. Occasionally, I build the world first, then populate it and throw in a plot. But mostly, my stories or novels start with a "what if" that includes characters and the situation.

My characters often start out in a "white room". I'm big on inner and interpersonal conflict, collective problem-solving and first contact, so the setting is there just to support the story, and can be filled in later. Don't get me wrong, I do provide basic descriptions along the way. But then my crit group and first readers hammer me with questions and I know where I need to provide more detail.

And then there's my grandson, Wil. If I could put him in that room, he would explore it with every faculty at his disposal: his eyes, his hands, his tastebuds, his ears and his nose.

Wil has a serious case of raccoon paws. That's a term my husband used when our son, Jason, was little. Jason would constantly touch things that weren't his or weren't meant to be messed with. Wil puts Jason all to shame. He gets into five things at once. I remarked to my daughter that his mind is super active and his body's struggling to keep up. At 3 am, when I couldn't sleep, it occurred to me that I needed Wil's inquisitiveness in my writing. When he does this stuff, I can just imagine what's going through his head: Will those fit me? 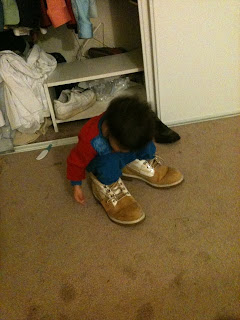 What sound would that make if I threw it across the room and it hit something? (He thinks this pretty much every day.)

Ooh! There's a hole on that thing where the music comes out. Where's that golf ball? (Really. He did.)

I wonder if these come off. I bet I can make this into a game. 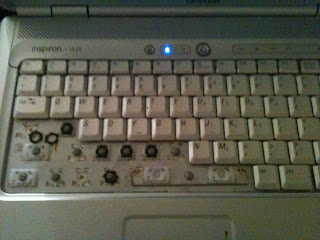 Can I fit in there? 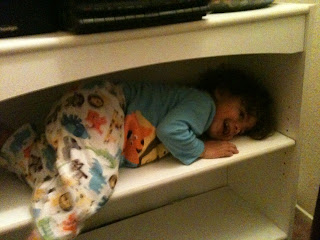 If I applied Wil's curiosity and over-riding instinct to explore his surroundings to my writing, I'd turn out some incredibly textured descriptions. Maybe, when I get my character into a new room or environment I should ask myself, "What would Wil want to do or know here?"

If I put him in the room with my character and he finds nothing to do, I have my work cut out for me.

Of course, when it comes to taste, that's his little sister's specialty. Everything goes in the mouth to see how it will taste and how it will feel on her gums with those teeth coming in. 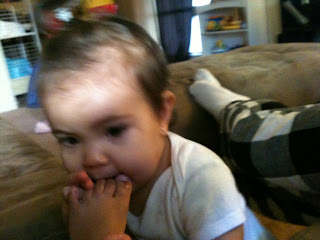 When I'm needing a refresher on writing vivid descriptions, I turn to Janet Burroway's Imaginative Writing: The Elements of Craft.

Authors who I believe excel at setting include: Daphne DuMaurier, John Jakes, Amy Tan, Vernor Vinge, William Gibson, Dan Simmons and Terry Pratchett. What authors are your favorites with regard to vivid descriptions?
Posted by Ann Wilkes at 2:34 PM

I second Terry Pratchett and want to add Neil Gaiman. His descriptions seem a bit lengthy at times but somehow they work and are always relevant. You sort of get the sense that this isn't the author describing something, it's the character.