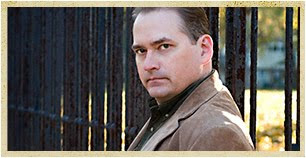 EE Knight has your basic rags to ... well, pro writer ... story. And now he's definitely on a roll with his meal ticket, the Vampire Earth series. Here's what the Vampire Earth website has to say of the series:

Our World is Under New Management.

A legendary terror has reentered Earth, establishing a New Order built on harvesting human souls. They smashed our society, altered our climate, and enslaved much of the population that survived their apocalyptic takeover.

Vampire Earth is a series of novels by E.E. Knight. They follow the life of David Valentine, from his youth as a young soldier fighting against the evil which has stolen humanity's future. Valentine grows to manhood defending the embattled freeholds, the remaining islands of sanity from the madness of the grotesque Kurian Order.

When he's not writing, EE Knight is gaming, reading, traveling, listening to good tunes or watching movies. He also digs speaking at conventions and libraries and teaching here and there. Now, let's get to know him a bit better...

AW: The market is flooded with vampires, zombies and werewolves. What makes your vampires special? What is your vampire canon?

EEK: If by canon you mean books that I drew on for my mythos, some of my favorite books include the Lumley Necroscope series, [John] Steakley's Vampires, and works by Richard Matheson and Stephen King.

With my vampire canon, I took the traditional powers of the creature and divided them into physical and mental. All the mental powers went to my ancient, virtually-immortal (thanks to their vampiric lifestyle) aliens - the Kurians. The Kurians look like an octopus combined with a bat, or maybe a living, misshapen umbrella with a lot of eyes at the top. They can appear to shapeshift (it's an illusion though; they might be able to make themselves look like a wolf, but they can't bite like one). They also have a psychic link with their subordinates. Physically, they're weak -- if you or I could get it on the floor we could stomp it to death fairly easily.

Each Kurian animates a handful of "Reapers." These are the physical side of the creature. They come out at night because sunlight interferes with the mind-to-mind communication of the Kurian and their Reapers (sunlight doesn't kill them; they just aren't as effective and can go stupid without their master puppeting them). Reapers are tall, bony, human-looking, with nasty fangs and long, clawed fingers. When a Kurian wishes to speak to a human he does it through a Reaper. They're fast, tough and wear thick robes of bullet-proof material. They live off the blood of humans, whereas the Kurian connected to the Reaper gets psychic energy from the fear and agony of the victim -- soul sucking, if you will. Sometimes a Kurian will torment a victim for a while before killing it, as a chef might add spice and sauce to a dish, the human's emotional state adds flavor. The system's rather like a James Bond movie, you know how Bond always has to deal with the villain of the movie, plus the villain's tough "Oddjob" type indestructible henchman.

AW: What does military life look like in your Vampire Earth series?

EEK: It varies from region to region, as you see in the books. My hero, Val, comes from one of the larger, better-organized freeholds fighting the vampires (I loosely based it on Tito's anti-Germans in Yugoslavia, a partisan army which not only had military formations but functioning hospitals, schools, and so on).

AW: Have you served in the military yourself?

EEK: No, I was lucky enough to be the first male in the family to turn 18 without his country being in the middle of a war. My dad and the other veterans said I'd be better off going to college.

AW: I love Daphne DuMaurier too. What is your favorite book by her and why?

EEK: I like Rebecca a lot, but the one I read more than any other is "The Birds" in the Don't Look Now collection. It's darker and lonelier than the Hitchcock version. I admire DuMaurier for her perfect pacing, the stories seem to really move along, but she takes her time, if that makes any sense.

AW: How about Stephen King?

EEK: I started reading him in the 70s, I was one of the first generation "The Stand" fanatics. Even his minor characters seem so real, it makes everything in his books seem possible.

AW: How has Louis L'Amour influenced your work?

EEK: He knew how to create a hero. They were almost always tough, competent, intelligent men, and through much of the story they were using all their skills to avoid trouble and reduce conflict. Bad actors and events would finally overtake them, and they'd do what they had to do to survive.

AW: What do you mean by bad actors overtaking them?

EEK: With Louis L'Amour, like a lot of great classic westerns (think Shane), the hero often goes to extraordinary lengths to avoid conflict. By "bad actors" I mean the villains of the piece. Events could mean anything from a range war spiraling out of control to the Indian War the hero's been trying to prevent starting anyway. For example, in L'Amour's Shalako, Shalako Carlin has found a party of rich, treaty-breaking upper-class hunters on Apache lands and is trying to get them out to preserve the treaty -- if the outraged Apache's kill Senator so-and-so and Baron Von Whoozis and Lord Whatever, it means another Apache war. The twist is the hunters are actually hoping to start a little dust up with the Apaches, they're sure their skill with guns and the superiority of their rifles will allow them to prevail over a handfull of Indians.

Clint Eastwood's Unforgiven is in this vein, but with a twist, that being Clint's character was one of those villains in his youth.

AW: What kept you going when you doubted your ability to make it as an author?

EEK: As I was trying to get published, I was working in a series of not-too-interesting jobs. The way I looked at it, writing, even with zero chance of getting published, was an outlet for my imagination and creativity. Otherwise I might end up just drinking my nights away in a bar slumped in front of the TV. 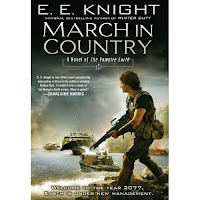 AW: Are your books easy to get into if we start in the middle of the series? Or should readers only start with the first book?

EEK: The first book, Way of the Wolf, gives the most background to the world. I write in little three book mini-cycles with like titles, so it'd be best for a newbie to jump in with Wolf, or Valentine's Rising, or Fall With Honor.

AW: What do you think is the appeal for a long genre series?

EEK: In sf/fantasy, it tends to be either a character or set of characters that the readers love and want to see in new situations, or a world they enjoy returning to because it's alive in their minds. I try and do both.

AW: Does a day ever go by when you're not thinking about one or another of your characters -- not including during your writing time.

EEK: Yeah, that's just it. When you're a storyteller, a line of dialogue or a situation or a character might pop into your imagination any time, so you have to be ready to drop whatever you're doing and jot it down while it's fresh in your mind. I'm not one of those authors who has conversations and arguments with my characters. To me, they're more like historical figures and I'm trying to get the biography right.

My book club read book 1 of this series. I enjoyed it, but it was popcorn. the girls in the group, didn't care for it as it tended to be a little mysogonistic(even for scifi), esepecially certain scenes. It was a fun, quick read, and I may give the other books a read.