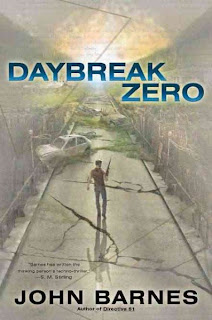 With Daybreak Zero, John Barnes continues his post-apocalyptic saga which began with Directive 51. Most of the "Daybreak" disasters have happened already: nuclear bombs, EMPs (electromagnetic pulses), nanoswarm – nanotechnology that attacks electronics - and biotes that turn plastics and rubber into odiferous, brown goo. The government is fractured into two when Directive 51 kicks in and the National Constitutional Continuity Coordinator and the acting President he appoints have a difference of opinion on how to proceed during the current crisis. The NCCC wants a military leader capable of bringing the fight to the enemy while the President believes there is no enemy. Daybreak seems to be the result of a system artifact, the propagation of an idea across the Internet and across the globe inciting people to wish to cleanse the Earth by destructive means to "heal" it.

In Daybreak Zero, Heather O'Grainne's Department of the Future sets up shop in Pueblo, Colo. to discover what's behind Daybreak and to help America get back to a semi-industrial society with transportation, communication, and a 1940s or 1950s level of comfort. Meanwhile, the Daybreak followers storm the populated areas like raging bands of primitives bent on destruction and annihilation.

Arnie Yang, an uber-cyber analyst, still believes a system artifact is behind Daybreak and that the ongoing, moon-based attacks are automated.

The country is set to split down the middle or launch into a second civil war with two governments claiming authority. Both sides finally agree to meet to discuss putting the country back together under one government. The talks are delayed when it's learned that some of the negotiating parties have been brainwashed by Daybreak followers.


He could see the watch's lantern glinting half a mile away. I could run and join them and just stay with them till they passed my house. Lots of people do that. But the time to have done that would have been to catch them on Main, in front of the courthouse; no, they'd wonder what had frightened him. They might ask. What could he say?

Deep breath. Walk and breathe like you're going to fight; if it turns out you are, it's one less thing to wrry about, and if not, it calms and clears the—

Arnie spun ne step backward into the space he'd been about to walk into, cross-drew his knives and held them at ready. "I've been expecting you."

Teeth gleamed in the dark under the blanket; the eyes were black blobs around the greasy promontory of the nose. "Expecting to stab me?"

"If necessary." Arnie shifted his weight for a better stance.


Barnes' style, at least in this series, includes quite a few rambling, conversational sentences that seem to derail in the middle, which kind of bugged me, but his excellent gift for storytelling kept me reading. In fact, as I said in my Directive 51 review, I couldn't stop reading to wait for Directive 51 to arrive, so I finished reading it out of order.

I liked Heather's tactile, old-school war-room. And teenage couriers sprint messages to and fro and are tipped with meal coupons. People who used to be obscure hobbyists are new tech leaders making radio tubes, building printing presses, and creating steam and water-powered this and thats.

And castles! Their neo-land-baron owners could pose a threat to the government or be a lesser evil that keeps order in their vicinities.

There were quite a few witty monologues and inner dialogs. I would expect the survivors of the apocalypse to have a good sense of humor. It would be a survival mechanism, right? Anyway, I enjoyed Heather's wit and Cameron Nguyen-Peters' (the NCCC) ironic sense of humor.

This novel provided a good balance between science, politics and the human condition. Barnes' offers believable characters with engaging conflict both external and internal. I look forward to the next book in this series. 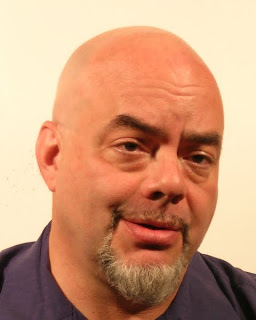 AW: Can you explain what a system artifact is for my readers?

JB: Actually, I'd love to. The editor and I disagreed about what the basic appeal of the book is (and there was no market research to settle the question), so a lot of my "how it works" material ended up on the cutting room floor. Warn your readers there'll be a quiz after this …

Artifact: something that arises arbitrarily from the way things work, an emergent property. Classic examples are that our inability to think about more than seven objects at a time, give or take, is an artifact of our brain; the potential for a stalemate is a system artifact of the rules of chess; the discomfort of time at the DMV is a system artifact of the way that our time is structured and the number of clerks and what they are and are not allowed to do.

So a system artifact is a message that doesn't have a single author/speaker/sender within the system, but arises in the interstices of the system. Cars on the highway send and receive messages, but congestion is a system artifact – it's a property created by all the cars, the highway, weather, work schedules, real estate prices, etc. together. A performance of a play is a system artifact – the audience's experience is created by everybody working together, including the playwright who is usually absent, the past experiences and expressions of other artists, and the behavior of the audience. Catholicism is a system artifact produced by the interactions of all the Catholics with each other and with the world around them, and possibly with things beyond this world, depending on whether or not you're Catholic.

Some system artifacts have fairly person-like qualities – hard science fiction, for example, tends to be stern and tough, telling people the world is this way and you can't just have it any old way you like. (Imagine a hard sf novel titled The Cheerful Void or Planet of the Soft Life). Whereas the whole self-help category is relentlessly positive and never-say-die (you'll never see anything on the self-help shelves titled Oh, Get Over It, You Big Baby! or Childish Dreams: How to Know When It's Really Too Late and You Should Just Give Up.) Those personalities of genres, again, are not any one person's conscious decision; they just happen over time, but they're nonetheless real.

Other system artifacts seem to be a relentless overall value or commandment repeated forever – very often we become aware of those when someone finally objects, as with, for example, the Disney Princesses, a complicated message that says girls should be plucky and cute, their fathers are bumbling nitwits, and the whole universe including inanimate objects and singing seafood will unite to bring them a boyfriend, which is the most important thing that a princess can have. There's a system artifact in Christianity that says that people who suffer are good, and one in the American version of democracy that says the lone arguer in the middle of a consensus is a vital resource to be protected, and one in the environmental movement that says energy conservation is nearly always preferable to energy production. Nobody thought those up individually and sold everyone on them; they evolved out of thousands or millions of exchanges.

Still other system artifacts seem to have evolution-like purposes, seeking to be reproduced, mutating to accommodate it. I don' t mean so much the simple ones like tweets with RT in them so much as songs like "Somewhere Over the Rainbow," which goes far beyond earworminess and turns into a whole collection of feelings, symbols, words, notes that partly take over the recipient's musical taste ever after; Heinlein juveniles keep trying to reproduce at science fiction publishers despite their dwindling audience (which doesn't include very many young people anymore), partly by constantly waggling the attractors of "this is where many existing customers came from" and "remember how much fun these were when they were new?" which they obviously acquired long after Heinlein wrote the original texts.

Now, a really complex message coming out of a really enormous system – say, two thousand years of Christianity, or a million lines of computer code, or tens of thousands of interactions within a family – can have all three kinds of qualities: a personality, a value, and a reproductive drive. And at that point you have the kind of system artifact I'm talking about – a little like the way some compulsions seem to pass from parent to child, or some religions seem to be more extreme than their own practitioners, or the way that whatever physics is reaching for, it has gotten beyond the comprehension of any individual physicist. But, of course, since this is a science fiction novel, I have it magnified in the imaginary future, increased enormously by the power of the internet and by an improving understanding of what really happens in motivational psychology and brain chemistry.

AW: What sorts of hobbies do you have that would come in handy in your Daybreak scenario?

JB: I enjoy looting, inciting mobs, and leading from the rear. Also, I know the locations of several survivalists I expect to have large caches ready. All right, that's a joke. Sort of. I was an Eagle Scout ages ago, back when you had to earn your own badges instead of having your mommy do them for you. I can cook wild game and have cooked and eaten critters for which I did not have directions. Having worked in theatre tech for many years I can improvise machines pretty well. And I'm not a bad teacher; I could open a school if people would feed me in exchange for teaching.

AW: If you lived in the aftermath of an apocalypse, what would you miss the most?

JB: Whatever was gone; different apocalypses would have different patterns of what was missing afterwards. I'm an old fat guy with bad eyesight, I prefer to live in densely urban areas, and I'd be a sitting duck. Almost certainly, I'd miss civil order briefly and intensely until whatever got me, probably in the first week.

JB: At this moment I'm finishing The Last President, the third of the Daybreak trilogy. Then I'll do some finishing work on Losers In Space, a hard-sf YA. My agent is peddling The Wordly Evidence of Grace, a mainstream YA, because Tales of the Madman Underground has done much better than most of my science fiction. In between, I'm working on moving to the self-publishing model; in the grand old ship of publishing, water is pouring into the hold, and I am not going to be the last rat down the hawser.
Posted by Ann Wilkes at 7:39 AM