The Fallen Moon Trilogy - both sides of an age-old struggle 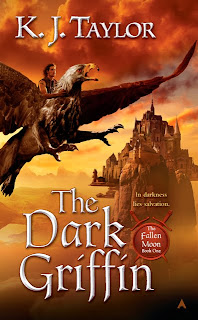 
This trilogy by Australian author K.J. Taylor takes the familiar idea of a human-creature partnership common to many fantasy tales, and twists it into a harsher version of that cliché. The griffins in the world of Cymria aren't domesticated beasts, existing only to serve human masters. Rather, from their point-of-view, partnering with a human brings them more advantages than remaining in the wild. The griffins are intelligent and have their own language, customs, and social structure. Some griffins choose to live in their Eyries among humans, but without ever taking a human partner. The griffins retain much of their savagery, killing or maiming humans when they're threatened. Although it is not socially acceptable in griffiner society, the griffins will even eat humans when they have a chance. The opening chapter of the first book even starts with a griffin, although this is a true wild griffin in the mountains beyond human lands.

Our story begins rather slowly, with the hatching of the dark griffin of the first book's title. It is apparent that this griffin is unusual, but the relevance isn't clear. The heart of the story begins in chapter 3, with Arren Cardockson, Master of Trade in the city of Eagleholm. Arren is a griffiner by accident, since he is of the Northern race from beyond the Northgate Mountains, most of whom have been enslaved by the griffiners and other Southern people. Although Arren was born in Eagleholm, the son of freed slaves, he still suffers discrimination since his black hair and distinctive features make his heritage clear to others. His griffin, Eluna, is the only thing that gives him any status and protection amid griffiner society.

When Arren is not able to restrain Eluna from killing a criminal, he is obligated to pay a debt. Lord Rannagon, Master of Law, offers Arren an alternative to a monetary payment. Arren attempts to hunt down a wild griffin (the dark griffin from the opening chapters) that has been eating farmers and livestock in a distant district. The mission goes badly, and even though Arren is able to use poison to capture the dark griffin, Eluna is killed. Returning to Eagleholm bereft, everything Arren has worked for crashes into ruin about him. The worse his life becomes, the more certain he is that Lord Rannagon has orchestrated it all. At the same time, the dark griffin fights his captors in a parallel struggle as he learns more about the human world.

By the end of the first book, I felt like this novel was a decent effort by a new author, but other than some interesting worldbuilding, lacked anything unique. I was even a bit perturbed by Arren's actions at the end because he appeared to care only for revenge, no matter the cost. However, reading on, I think I misread Arren's attitude at the conclusion of the first book - he wasn't actually aware of the cost until later (which he discovers in the second book).

A quick warning - minor spoilers ahead.

I believe the cover of this mass market paperback edition and the chapter titles did the book a disservice by telegraphing too much of the plot. I mean, since there was a man riding a dark-colored griffin on the cover, I expected Arren and the dark griffin to pair up at some point. This expectation ruined some of the tension through the book for me. Despite the sympathy that I felt for Arren as terrible things occurred, his attitude at the end of the first book caused me to dislike him. If I hadn't had the next book in front of me already, I might not have continued reading. However, as hinted at above, Arren only later realizes what he has done to Eagleholm, and struggles with it as the story continues. 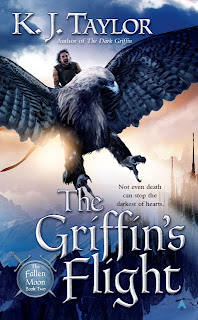 In the second volume, The Griffin's Flight, Arren flees with the dark griffin, now named Skandar. They are outcasts with an uneasy truce, hunted and alone, knowing that they cannot dare to trust anyone. Yet, when Arren rescues a strange woman from drowning, he finds that she has as many secrets as they do. For Skade was once a griffin, but has been cursed by another griffin's magic and is bound in human form. While Arren wanders the countryside, he tries to resist his increasingly evil nature, but cannot avoid causing more death and suffering as he tries to avoid capture.

Eventually Arren encounters enslaved Northerners and finds sympathy among them. His journey leads him further north, seeking a place where he and Skandar can live apart from the harassment of others. Yet in his travels, he realizes that he has the notoriety and power to help the slaves reclaim their homeland. When he is visited by the patron Dark Goddess of his people, Arren cannot refuse her pact, and his fate is bound to that of the North. Arren feels the evil spreading within him, only tempered by a growing love for Skade. 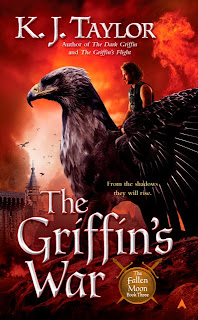 The second and third books also follow Erian, son of Rannagon, as he pursues his father's murderer (Arren). Erian may be annoying, entitled, and naive, but his griffin is knowledgeable and crafty. Together they earn a place in Malvern, the griffiner stronghold in the North. Erian strives to please the Eyrie Mistress so that he will be granted the freedom to search the North for Arren.

The more I read through the second book, the more I started to like Erian. The story let me see the struggle of good versus evil from both sides. While Arren appears to fulfill one side of a prophecy, transforming into the Dark Lord in The Griffin's War, Erian is his opposite, setting out on his own quest in the third book. Yet Arren as the Dark Lord is humanized in a way that we don't usually see. While Arren is growing more ruthless and evil, he still fights for a noble cause - the freedom of an enslaved people. The Southerners are defending their adopted home and their way of life, as well as their lives. Yet in the end, both sides cannot win.

I enjoyed the second and third books more than the first volume because of the way I was able to see both sides of the struggle. It was an interesting experience to have no idea which side would triumph, but also to be unsure of how I wanted it to end. Who should win - good or evil? Maybe it's not always that simple.
Posted by Ann Wilkes at 11:57 AM