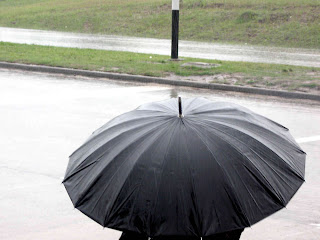 Irwin stepped through the door of their modest duplex and wiggled out of his trench coat, carefully avoiding touching its outer parts. "Is this rain or snot?" Then he removed his hat and gloves the same way.

"I don't know why you had to go out in it," called Isabel from the kitchen.

"I told you, I had to get that insurance premium posted today." He listened to make sure Izzy was still in the kitchen and put his pint of whiskey in the bookcase behind War and Peace. He had bought two, but finished the first on the way home.

But you couldn't have thought about that last week when I reminded you to cut the check? Isabel thought, but didn't say. Isabel frowned as she looked at the sign she'd stuck on the fridge that read, "Poor planning on your part does not constitute and emergency on my part." It was originally meant for the kids, who were now grown and gone.

"Scientists have yet to identify the foreign compounds in the rain. People are advised to stay indoors as much as possible and wear protective clothing when outside, even if it's not currently raining."

"Hear that, Izzy? Still don't know what it is." He scratched his stubbly chin.

"You think it's from aliens?" she said, wiping flour off of her hands on an apron as she scuffed into the room. "If the compounds aren't known, they must be new or extraterrestrial, right?"

"I spose. I hope they figure it out soon. I'm getting sick o' bein' cooped up." Irwin was already wondering how he could sneak out for a drink later on. Maybe the rain is harmless. Just slimy. Heck, he thought, scientists tell you something different every time you turn around. Maybe it will be a miracle cure for eczema. He chuckled to himself.

Irwin snuck out for a drink or a bottle every day over the next four rainy days, sometimes forgetting his gloves or hat.

Irwin and Izzy crowded in their living room window craning their necks to see the large, bright light streaking through the afternoon sky. The same newswoman narrated from the EI wall behind them. "Dr. Nora Mirsch at MIT says the object is not of natural origin, and therefore must have been constructed by intelligent beings from outside our solar system. When asked the purpose of the device, she said it is not clear. All astronomers at major observatories agree that its trajectory will just miss both the earth's atmosphere and its gravity well.

"Scientists at NASA and JPL are trying to determine the type and severity of its radioactive emissions."

Irwin fell asleep on the couch that night. Isabel woke him up the next morning. Her face was a pasty grey and her eyes were red.

"I'm dying, you fool! Look at me! That thing in the sky. The news said it was an alien probe leaking radiation."

Then she scrutinized him. He certainly looked hung over, but not sick, she thought.

Izzy held her hand over her mouth and ran for the bathroom.

Irwin went to the window. The thick rain fell mercilessly. He ran his fingers through his unruly, greasy hair. He needed a drink. Then he grabbed the windowsill to steady himself. That's it! Must be the booze what kept me well. Maybe the radiation can't attack pickled people. Then he thought of Izzy puking in the bathroom. He'd have to go get enough for her, too.

He donned his raincoat and poked his head into the bathroom. Isabel still sat on the floor facing the toilet. "Izzy, I'm gonna go get you some medicine. Everything's going to be alright."

Isabel looked at him with a kind of defeat in her eyes. She thought he'd finally gone completely nuts. And now he's leaving me alone to die! When she heard the front door close, she leaned against the bathroom wall and wept.

Irwin was surprised that people were out and about. He bought two fifths of the cheapest rotgut at the corner store and headed back out into the rain. He thought he was hallucinating when, as he turned the corner he encountered a couple dancing in the rain without raincoats. And a whole family were in their yard playing in the mud in their underwear. That's it. We're all doomed for sure and these poor bastards have lost it.

When he got to his block, he saw half his neighbors playing in the rain. None had on raincoats and a few had on nothing at all. They were twirling in the rain, reveling in it.

Maybe it's alien mind-control, that muck. And the booze's what spared me. He felt conspicuous in his trench coat and kept his head down. At home, he threw off his coat and rushed to find Isabel. She wasn't in the bathroom. Has she been got at? Was she dancing outside and I didn't see her? He found her on the bed. His heart thudded in his chest. She wasn't moving. He felt her wrist for a pulse. His own pounded so hard he couldn't tell where hers was. At least she wasn't cold. He felt her faint pulse on her fevered neck. Her eyelids fluttered open.

"It's a protection from the radiation. They think the aliens couldn't stop…" she convulsed and coughed blood. He held her and wept as she tried to continue. "…their malfunctioning probe. They…they…the slime…it's for the planet. Protects…" Isabel coughed again. Her eyes rolled back into her head as she collapsed, lifeless, onto the pillow.
Posted by Ann Wilkes at 9:36 AM