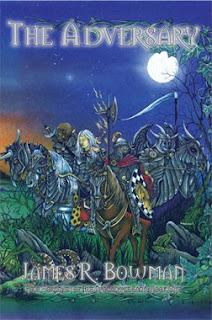 
In Bowman’s multiverse, Lucifer’s right-hand man, AKA the Adversary, is tired of playing second fiddle. Heck, he’s done with the whole status quo thing and decides the time has come just to wipe out all the remaining mortal heroes and destroy life as we know it. In other words: apocalypse time.

Tomas Walker, ex-British government assassin, is one of the last of these heroes, known as “guardians.” His life takes a strange turn when the Adversary’s minions show up to try to kill him. He’s on the run and is drawn back to the mysterious Glastonbury Hill, where he encounters none other than the Archangel Michael. Michael tells him it's time for him to accept his true destiny and save the multiverse from the evil fate the Adversary has planned.

Meanwhile, another guardian awakes in Santa Fe, New Mexico -- Tomas’ sister Gwen, a Goddess-worshipping New Age shop owner. She has her own quest: to find the tree of life (not Etz Chaim, as you might expect given all the other Judeo-Christian references so far, but Yggdrasill, of Norse myth.) Turns out, her BFFs are actually a group of exiled Valkyrie and they set her on her path after a giant Kachina (Hopi spirit doll) goes Godzilla on the town.

Oh yeah, and the powers that be are actually the Four Horsemen of the Apocalypse: War, Famine, Pestilence, and Death, and Michael and the Valkyries answer to them as the “Absolutes.”

Confused yet? The Adversary is a very long, dense, and intense novel. Unfortunately, it also bears the subtitle: “Four Horsemen of the Apocalypse Saga, Book One” and when the stalwart reader reaches the end of 1,028 pages, the story simply stops, with nothing resolved. Likewise, Melrose Press’s website does not yet have a listing or any information about a second book in the series, even though the official publication date of this book says 2009. That makes me worried that a reader may have to wait several years for a conclusion.

This book was short-listed for the Brit Writer’s Published Writer of the Year Award (2010), but for my money its complicated and rather epic plot isn’t helped by the constantly shifting point of view. Early sections of the narrative seem to glorify gore, like an amateur horror story or one of those “Saw” movies, but I’m personally very fond of religious mash-ups and was willing wade through that to get to the archangels and adversaries. If you’re similarly interested in eschatological fiction and okay with leaving the story hanging until the next installment appears, you may wish to seek this novel out. There’s certainly a lot to chew on in this massive book.
Posted by Ann Wilkes at 3:21 PM

needs a better cover. Sorry, it has that "I had my neighbors kid draw the cover" look. I would have prefered a plain cover with a simple graphic element like a sword and shield

Seems like the neighbor's kid did more than draw the cover, they must have written it too.

The book isn't that poorly written, and I'm sorry if I've given you both that impression. I struggled with it, but there were many moments I enjoyed.