Ring around the rosie
Pocket full of posies
Ashes, Ashes
We all fall down

There is serious debate about whether this rhyme really originated in 14th century, plague-ridden England. Snopes says no. But I couldn't resist including it here. Especially since it's Ash Wednesday. Black Death debuts on Friday, March 11th in Los Angeles. Below is Emily's movie review debut for Science Fiction and Other ODDysseys. 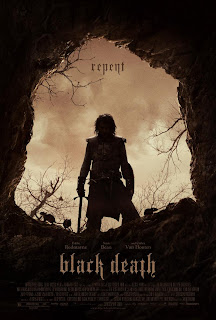 
In this age of movies with confusing and unnecessarily pretentious titles, Black Death is refreshing in that you know exactly what you're getting. Still, I wasn't really sure what to expect when it came to a horror film about the bubonic plague. From the press info I'd received, I knew that it starred Sean Bean (always a plus), was intended to contain notes of religious conflict (also a bonus if done well), and that it was shot entirely on-location in Germany. The latter was a major selling point for a viewer who remains somewhat skeptical of the use of 3D graphics in film.

The atmospheric and dark, orchestral opening leant an ideal backdrop for Sean Bean's ruggedly handsome appearance as battle-worn Ulric, an envoy to the bishop, who has been tasked with discovering the truth behind reports of necromancy in a remote village in the marsh.

The movie had its ups and downs. I was impressed by Eddie Redmayne's performance as Osmund, the young and conflicted monk who accompanies Ulric on his journey. He was just jaded enough to make his internal conflict real, but just boyish enough to endear him to the audience. Sean Bean also delivered a gritty and intense performance, though that was to be expected (I'm a Sean Bean fan, can you tell?).

Director Christopher Smith noted in an interview that he tried to stay true to the real atmosphere of life in 1300s plague-ridden England, and he did so without being overly grotesque. There were bodies on the streets and an ever-present haze of smoke, but he avoided unnecessary depictions of gore throughout the film.

A director who has perfected the art of classy violence is a rare breed in a cinematic era populated by movies like the Saw series, Hostel and Final Destination. There's something to be said for the pure shock value and visceral reaction that blatant displays of violence elicit in an audience, but I personally prefer films like those of Alfred Hitchcock, which rely more on atmospherics and psychology to make the movie thrilling. Christopher Smith gets major props from me for his balance of violence and interpretation in Black Death.

Sean Bean portrays gritty, conflicted characters well, but the role of Ulric seemed to be almost (dare I say it?) Boromir 2.0. This is of course no fault of his own, being victim of unfortunate typecasting after his Lord of the Rings success, but it was difficult at first to see Ulric and not immediately think "Boromir." Especially when the two characters have so many similarities.

The film promised to be an exploration of the conflict that arises when the Church loses its ability to truly protect those who believe in it, but it wasn't nearly as eloquently delivered as I'd hoped it would be. Instead of being about inner struggle and the destruction of faith, the portrayals of the extremes of the conflict (Ulric and the witch woman Langiva, played by Carice van Houten) were so heavy-handed as to nearly be caricatures. Almost no mention is made of people, events and environments that shaped their personalities. It's hinted at that Ulric had lost family to the plague and Langiva had lost family to the Church, but the storylines don't develop beyond that, making the supposed religious conflict fall somewhat flat.

Black Death is a film worth watching. The atmospherics, the stunning performances by Bean, Remayne and van Houten, the captivating and well-orchestrated soundtrack, and the excellent balance of gore and interpretation more than make up for the film's few shortcomings. Christopher Smith did an excellent job with the film, and I look forward to seeing what he comes up with next.

Now isn't that interesting? When I learnt it via a British education, the line "Ashes, Ashes" was not "Ashes, Ashes" but "A-tishoo, A-tishoo", as in sneezing.

Thanks for a review of "Black Death". I'll keep my eyes open for it.

Kaz, yeah. That's what snopes said. I guess it got mangled as it crossed the pond. Then someone writing a book made the connection in error. Or on purpose, to support the book? No. Nobody would do THAT! >cough, cough - Dan Bro..<

I like this movie, even though it was a low budget film the acting was top notch with plenty of action. Definitely not destined to be a true historical story, but quite enjoyable.