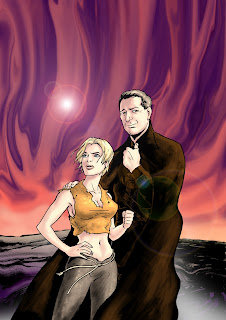 Radio shows rock! You don't think so? You haven't heard The Minister of Chance. It's not just visual sound effects that have come a long way. I got totally lost in the story like I was there. The Minister of Chance is a new British science fiction audio series which is sort of like Nazi Germany taking over a backward planet instead of France. But these invaders will politely send you to the dungeon or to the labor camp and wonder why you're not honored to do it. The invaders believe in magic, not science. Their leader is the Witch Prime and their standard salutation is "Happy Spells".

While smuggling food to a scientist who is part of the resistance, Kitty encounters the Minister of Chance. The atmosphere and humor will whisk you away to a world you've never imagined. You'll laugh at Kitty's protestations as she follows the Minister of Chance through a door that wasn't there a second ago and across the frost bridge into another realm. A far cry from slinging ales at the pub where she worked. The Cockney does get a bit thick at times for those unaccustomed to it, but it's so worth it for the flavor that it adds.

The witty, sarcastic dialog and the acting are flawless. I should know. I've listened four times. :) It's space opera at its best. Right up there with Dr. Who. Jonathon Barnes recently interviewed Julian Wadham, who plays The Minister of Chance, over at his Pantisocracy blog.

You can download an MP3 of the first episode, "The Broken World", for £1.49 via credit card or paypal. And please tell your friends. This is a production of Radio Static and depends on your patronage, rather than, as their press release states, "the BBC, the Government, or any other criminal organization." Episode Two: "The Forest Shakes" will be released on April 14th. Can't wait!
Posted by Ann Wilkes at 3:13 PM

Is iteresting enough that I will listen to some more. I am currently backlogged on my... well... everything.
I have still not listened to the Museum of Everything, but it is scheduled for later in the week as they have now developed a device that will allow you to listen to pre-recorded sounds in the comfort of bed... with a flashlight... under the covers.

And... have you ever hear of the Firesign Theatre?

The Museum of Everything is excellent, particularly the episode where they host a science fiction convention.