After Hours: Tales from the Ur-Bar -- Who can resist a drink poured by Gilgamesh? 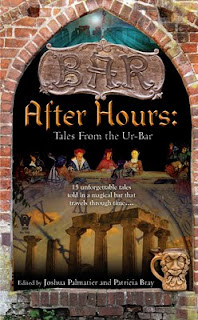 After Hours: Tales from the Ur-Bar
Edited by Joshua Palmatier and Patricia Bray
DAW 2011

In After Hours: Tales from the Ur-Bar, editors Joshua Palmatier and Patricia Bray have taken the clichéd tavern meetup of fantasy stories and role playing games and turned it on its head in an entertaining anthology that revolves around a time-traveling bar. Benjamin Tate establishes the origins of this Ur-Bar in the first story of the collection, "An Alewife In Kish". In ancient Sumeria, perhaps in the city of Ur, Kubaba has been cursed to live an immortal life spent tending her drinking establishment. While the origins of her curse and the nature of the magic are never really elaborated, that is not the point. When her bar is visited by Gilgamesh, she strikes a deal that allows them both to achieve their ultimate desires.

With Gilgamesh, known as Gil to many of his patrons, at its head, the Ur-Bar evolves a second meaning as the earliest or original Bar. Popping into different time periods, the bar brings Gil in contact with many people and cultures in its travels. There are a few common elements to each story - mainly that Gil runs the bar and makes at least a peripheral appearance in every tale. I found that he was a remarkably consistent character for being written by such a diversity of authors. Other recurring elements include a stone tablet that contains the gods' original beer recipe. Gil himself has a mystical quality, which comes into play in some of the stories. Whether he can mix that most exemplary (and maybe magical) drink, or if it's just to talk, Gil helps his guests with their problems.

The stories follow "An Alewife In Kish" in chronological order, from the Vikings to ancient Rome, on to Europe and America in the eighteenth and nineteenth centuries, and even into one possible future. The tales are set in a bar, but are only peripherally about the drinks - rather they are about the relationships that evolve as a result of entering the Ur-Bar and interacting with its other patrons and inhabitants. At the end of the volume, there are biographies for all the authors. I have highlighted some of my favorite stories below:

Maria V. Snyder pours us some "Sake and Other Spirits" in ancient Japan. Azami has fled from life as a samurai's wife and works in the Ur-Bar, but a water vampire is killing travelers and complicates her escape after her identity is discovered.

An orphan boy peddles junk and causes strife between rival bars in "The Tavern Fire" by D.B. Jackson. Set in Boston in the 1700's, this story ties a true historical event into the narrative.

Seanan McGuire highlights some lesser-known properties of mixed drinks in "Alchemy of Alcohol", complete with drink recipes at the end. The Summer King hopes that Gil's alchemist can help him revive the Winter Queen, but family disagreements lead to broken bottles amid a magical battle.

While Prohibition may have impeded Gil from operating his bar in America for a short time, Paris during the '24 Olympics makes an exciting setting in "Paris 24" by Laura Anne Gilman. An epee fencer from the U.S. team seeks a little excitement, but instead has to think about what he wants out of life when a world war hovers in the near future.

"Steady Hands and a Heart of Oak" are needed by British sappers, but a stiff drink from Gil can also help. Ian Tregillis shows several futures and a man's struggle to decide upon the best one amid war-torn London.

I found Jackie Kessler's tale – "Where We Are Is Hell" - to be the most unique story. A ghost trapped between heaven and hell finds her way into the Ur-Bar, where speaking to Gil helps her remember what was important in her life.

What does the future bring for the Ur-Bar? Zombies, apparently. In "Izdu-Bar" by Anton Stout, we see a glimpse of the world after the zombie apocalypse. The bar is on lockdown and no one is to be admitted after dark. However, when the bouncer's greed overcomes his common sense, will a drink be able to save him?

This was a light-hearted collection of stories which I think would be easy for most readers to relate to, as the majority of them have a historical setting that is readily identified. As with all anthologies, the theme is present throughout, but I felt that there was enough variety to keep me entertained without causing me to feel like I was reading the same story repeatedly.
Posted by Ann Wilkes at 12:38 PM

It seems I remember a similar type of story line about a bar that skips through different earths or planets but every place it ends up, everyone thinks they have been there for some time. They never know the time they are leaving so everyone has to stay close or end up stuck forever in the old location. Wish I could remember the name of the story.