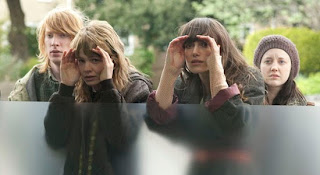 I originally read the novel Never Let Me Go, by British-Japanese author Kazuo Ishiguro, as a senior in high school, working on our world lit unit, and I loved it. When I saw that there would be a movie adaptation, I was both excited and filled with trepidation---after all, nobody likes to see one of their favorite novels butchered on the silver screen.

Mark Romanek didn't let me down. The film adaptation, starring Carey Mulligan, Keira Knightly, and Andrew Garfield, was just as delicate and thoughtful as the novel had been. In an alternate-reality version of the year 1952, a medical breakthrough has allowed the average lifespan of a human to extend well beyond 100 years. However, this new longevity comes with a price: The harvesting and transplant of vital organs from artificially-replicated human beings raised for the sole purpose of organ donation. The film follows the life of a girl named Kathy H (Mulligan), one of these donors, as she grows up and becomes more aware of her world and the role she has to play in it.

The leads in this film, Carey Mulligan (probably best known for her role as Kitty Bennett in Pride and Prejudice), Keira Knightly (Pirates of the Caribbean), and Andrew Garfield (Red Riding and The Social Network), are incredible actors on their own, but they come together to deliver a powerful performance as students who were all raised at the same grammar school in the English countryside. They each have a certain subtlety to their performance that allows them to collectively convey the more delicate aspects of life---things like being hurt by something too beautiful, the ache of loving someone you can never have, and the knowledge that one day, you will die, perhaps without ever discovering what your life was really about.

Beyond actor performances, I don't think that I can emphasize enough how stunning the cinematography was in this film. Each shot seemed to be rendered for maximum impact, and cast in a palette of muted browns, greys, blues and greens that reflected both the typical weather of England (where the film is set) and the drab loneliness of existence as someone whose entire purpose in life is to die. The play of light and shadow, too, contributed to the tone of the film, and the soundtrack---done by Rachel Portman, known for her work on films like Chocolat and Mona Lisa Smile---was subtle but eloquent, contributing to each scene rather than distracting.

Overall, Never Let Me Go was a stunning film adaptation. Though the movie is undeniably sad (and will probably cause at least one minor existential crisis), I think it's definitely worth seeing at least once.