I Saw the Devil - a bit of a stretch 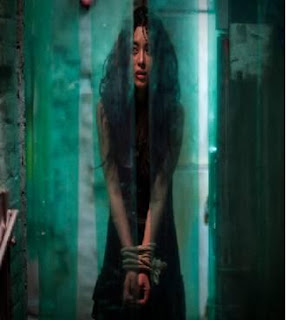 I SAW THE DEVIL
Written and Directed by Kim Jee-woon

The sinking feeling started when I sat down to watch I Saw the Devil and realized that the running time of the film was 144 minutes — nearly two and a half hours. From what I'd read and heard, I Saw the Devil didn't seem like the type of film that would have enough content to warrant that runtime. Still, I'd had good experiences with Korean horror/thriller films (the Vengeance trilogy and dramas such as IRIS and Time Between Dog and Wolf), so I tried not to dwell on that.

Unfortunately, I found myself more than a little nonplussed.

I Saw the Devil is a film about a detective named Soohyun (Lee Byunghun) who becomes obsessed with vengeance after his fiance, Jooyun (Oh San-ha), is tortured and murdered by a serial killer named Jang Gyeong-chul (Choi Min-sik). The film was directed by Kim Jee-woon, who is known in South Korea and globally for being a director capable of tackling a wide variety of genres. I was hoping that I Saw the Devil would be handled with the same grace as the two films of his that I'd seen previously, especially considering that one (A Tale of Two Sisters) is of a similar genre. Unfortunately, the film failed to impress---despite being compared to other such iconic cult films as Sympathy for Mr. Vengeance, it lacked both the attention to aesthetics and the stomach-clenching tension that I've come to expect from South Korean horror.

The film is supposed to center around Soohyun's slow transformation into a monster as he pursues his quest for vengance, calling into question the legitimacy of the "an eye for an eye" approach to life, but really it just felt tedious. Soohyun's wife dies within the first five minutes of the film---the entire remaining two hours and twenty minutes is dedicated to Soohyun's pursuit of the killer, and his game of catch-and-release. The idea in itself is good, and could be executed well, but by the end of the film I was basically thinking, "Okay, I get it, you're angry. Can this movie be over yet?" The depiction of a quest for vengeance isn't a new idea, especially in the South Korean cinematic realm, but the idea of a catch-and-release game is---however, I think Kim Jee-woon was a little overambitious in terms of time, turning what could have been a deeply psychological and tense film into a seemingly endless cycle of monotony.

In terms of performance, Lee Byunghun and Choi Min-sik are both extremely capable actors; they've both handled a wide variety of roles and done so with skill, but Kim Jee-woon didn't give many chances for expression. Given more expansion, I think Lee's character could have been extremely sympathetic; however, with the exception of a few brief, terse conversations, usually by phone, Lee Byunghun doesn't do much talking. His character is very stagnant. As a viewer, I didn't get the impression that he was changing as a person---it just seemed like he got really angry after his fiance died and stayed angry throughout the course of the film. That said, Choi Min-sik delivered a brilliantly creepy and skin-crawly performance (as he's done before in the role of serial killers, Mr. Baek in Oldboy and Sympathy for Lady Vengeance being the ones that come to mind), seamlessly filling the role of an unhinged sociopath.

Overall, I think that I Saw the Devil is worth seeing, but probably not worth buying a ticket to see. And if you're expecting something like the Vengeance trilogy, don't get your hopes up.