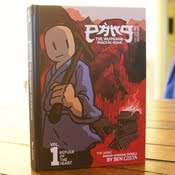 If you’ve ever applauded your way through one of Jackie Chan’s “Drunken Master” films, but secretly wished that along with the subtitles there were pop-up bubbles with information about Chinese customs, history and/or language, Pang is a graphic novel for you.

This volume collects 188 pages of the on-going web comic Shi Long Pang, which you can find at shilongpang.com. The story takes place in 17th century China and follows the title character, Pang. Pang himself is drawn in a simple style, which reflects his “uncarved block” personality (with apologies for making a Taoist reference for a Shaolin monk). In this way, Pang stands out in a visual simplicity among the vividly colored, complex and sometimes cluttered panels. However, I think that contrast is not only perfect for this sort of character and story, but also highlights the intensity of the times in which Pang lives.

Costa tells a serious, epic story about the Three Feudatories War, while simultaneously following the personal and sometimes gently humorous tale of Pang – a rotund, sheltered monk, who finds himself thrust into the center of the conflict. Pang is very likable from the moment he enters the picture. Like a bumbling hero in a Golden Harvest film, he’s the moral center of any argument and (as a bonus!) surprisingly cool/capable in a fight.

Pang is one part sweet, one part serious, and a whole bundle of awesome. A great read. I devoured the whole thing the moment I sat down with it. In fact, now I plan to take the time to hunt through the archives at the web comic, so I can start to follow along in real-time with the continuing adventures.
Posted by Ann Wilkes at 12:07 PM